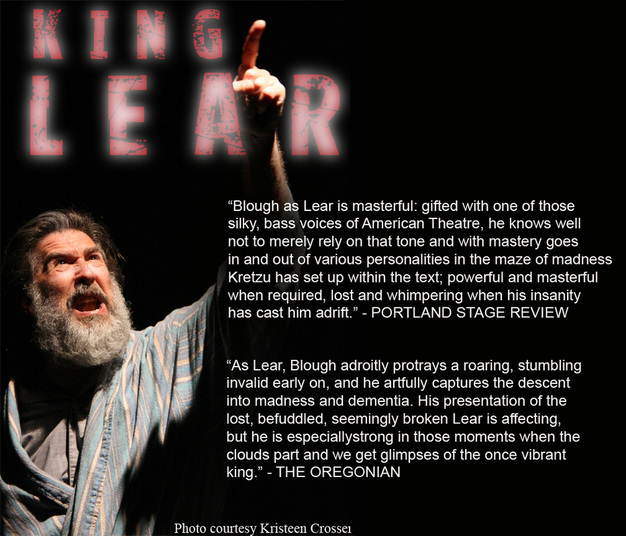 Waiting For Godot
"Tim Blough infuses Estragon with such warmth and unpretentious pathos that (for the first time in one of my viewings of this production) I felt the pain in his feet and the confusion in his heart. Blough never once goes for the easy reaction or moment and plays 90% of the role in his eyes and I loved him for it." - THE WEEKLY SOURCE
The Cherry Orchard
"For me, this production pivots on Blough’s deeply sympathetic interpretation of Lopakhin, the butcher’s son turned entrepeneuer whose abiding affection for this nouveau pauvre family leads in a curious way to his own abandonment and loss. I’m accustomed to shuddering at the end as the ax bites into those falling cherry trees. For the first time, I see the land not so much as victim but as victimizer, and the good man Lopakhin, not the trees themselves, being felled." - ART SCATTER

"As Lopakhin, Tim Blough is believable as both rube and winner, and shows us how much even the beneficiaries of a new order can lose amid the change."-  THE OREGONIAN
Fly By Night
​
Tim Blough (deli owner Crabble). Blough captures Crabble’s working class despair to perfection, and simply sparkles with life during his two turns directing traffic – once in memory, once in real life. " - WESTSIDE THEATRE

To Kill A Mockingbird

“Tim Blough stands tall in the role. He captures the mulling, kindly, easy rhythms of this man who acts
with careful deliberation and thoughtful sympathy for others; but we also see the passion that underlies
his unruffled surface. When confronted by Bob Ewell, Mayella's fiery, bigoted father, Atticus coolly
holds his ground, and yet later when he learns that Ewell assaulted his children, we see a short but
telling outburst of rage and even a certain amount of muttering confusion when he tries to bring order
to himself and the situation.” - The Oregonian

“The scenes between Blough's Atticus and Green's Ewell and Colombero's Mayella, as refereed by
David Heath's Judge Taylor, who has difficulty hiding his distaste for the plaintiffs, are truly absorbing.
Especially powerful is Blough's version of Atticus's final statement to the jury reminding them and us
of our responsibility as citizens to make the legal system work justly." - The Oregonian

“To Kill a Mockingbird, which features a beautifully restrained and quietly powerful performance by
Tim Blough as Atticus.” - Oregon Artswatch

“Blough’s tired, stolid, middle-aged, enduring, and close to tragic Atticus towers over everyone,
wrapping the story in his strong and comforting and ultimately defeated arms.” - Oregon Artswatch

“The cast is led by the excellent Tim Blough in the role Atticus Finch, who provides the play's moral
leadership." - Broadway World

"Tim Blough (as St. Claire) is an experienced and deft actor whose resonant voice and dignified affect stand in stark contrast to the frequently wacky performances of his cast mates. Much of the show’s emotional content comes from his gradual evolution from Scrooge to grieving father, done so smoothly that I really didn’t know what was happening until he neared his personal climax." - Westside Theatre Review